I’m a huge fan of the free walking tour. When I’m travelling to a new city or town, it’s the first thing I Google. It’s the perfect way to get the layout of a city and orientate yourself. Also, the guides work for tips only, so the standard of the tour is very high. The better the tour, the higher the tips. It’s a win-win situation for both parties! I chose to do a free walking tour with Good Vienna Tours.

When it comes to the history of Vienna, I’ll be the first to admit that my knowledge is extremely limited. I knew that Vienna is known for its classical music masters like Mozart and Strauss and its operas. That was the extent of my knowledge. During the tour, I learned so much about Vienna’s history and culture through colourful anecdotes and stories. For example: did you know that Vienna is 3000 years old? Or that at one stage Vienna had the most millionaires in the world? Here’s what you can expect from a free walking tour with Good Vienna Tours. 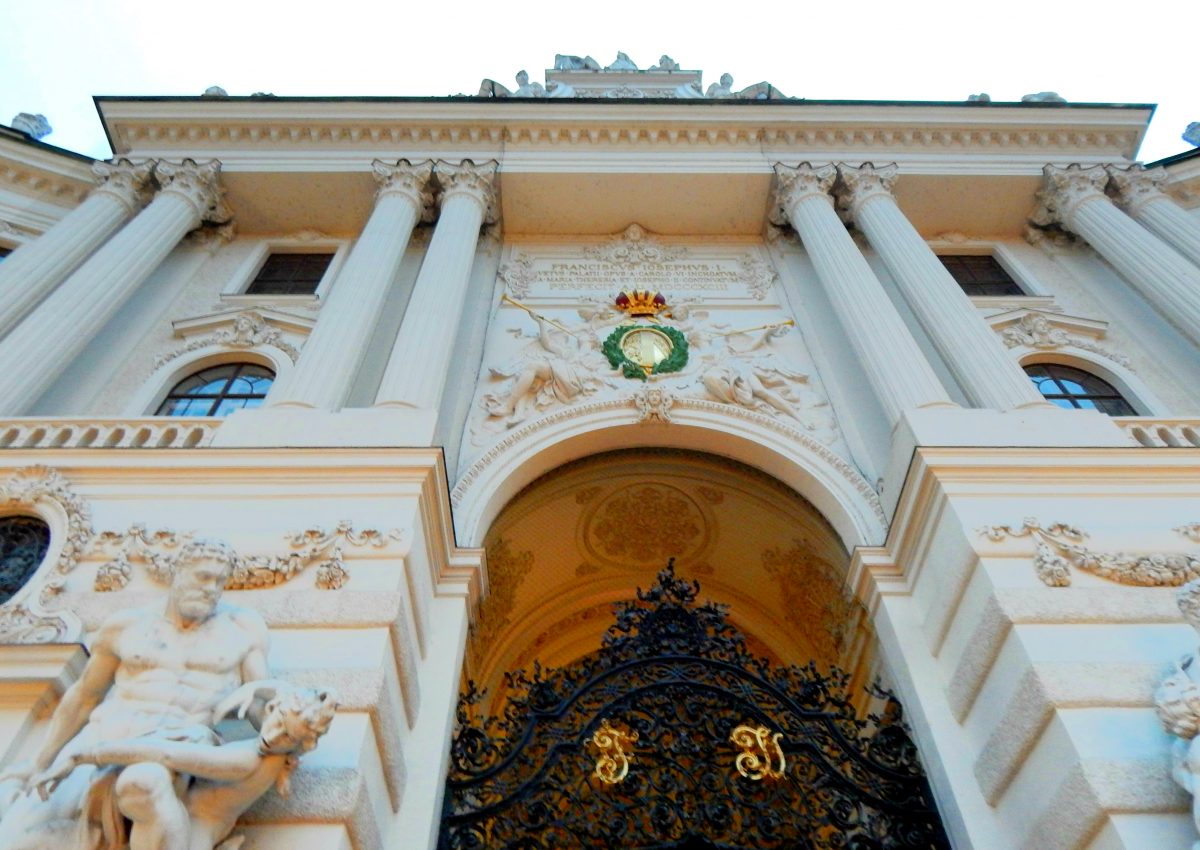 First off, you get a local guide! That’s a big plus for me. I’ve got nothing against foreign tour guides, but locals always have great stories and insider tips. My guide’s name was Julia and she was phenomenal!

The free walking tour takes you to all the major sights and lesser-known sights in the city centre of Vienna. It lasts between two and a half to three hours.

The tour starts at the Albertina. Remember to visit the museum after the free walking tour. Inside you’ll find paintings by renowned artists like Monet, Picasso and Van Gogh. The most famous work of art is ‘Young Hare’ by Albrecht Durer. 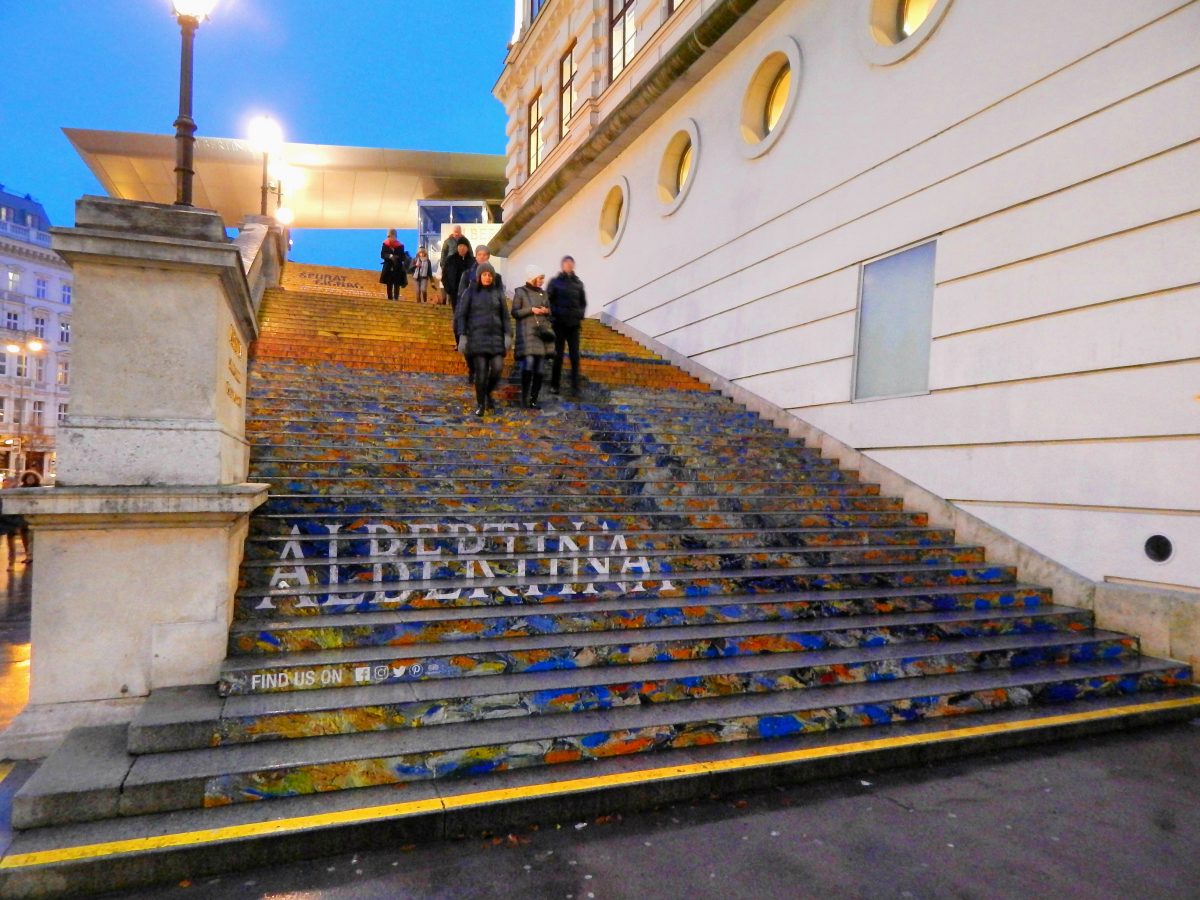 Hofburg Palace and the Royal Family

Next up on our tour was the palace, the library and a statue of the beloved Emperor Joseph. 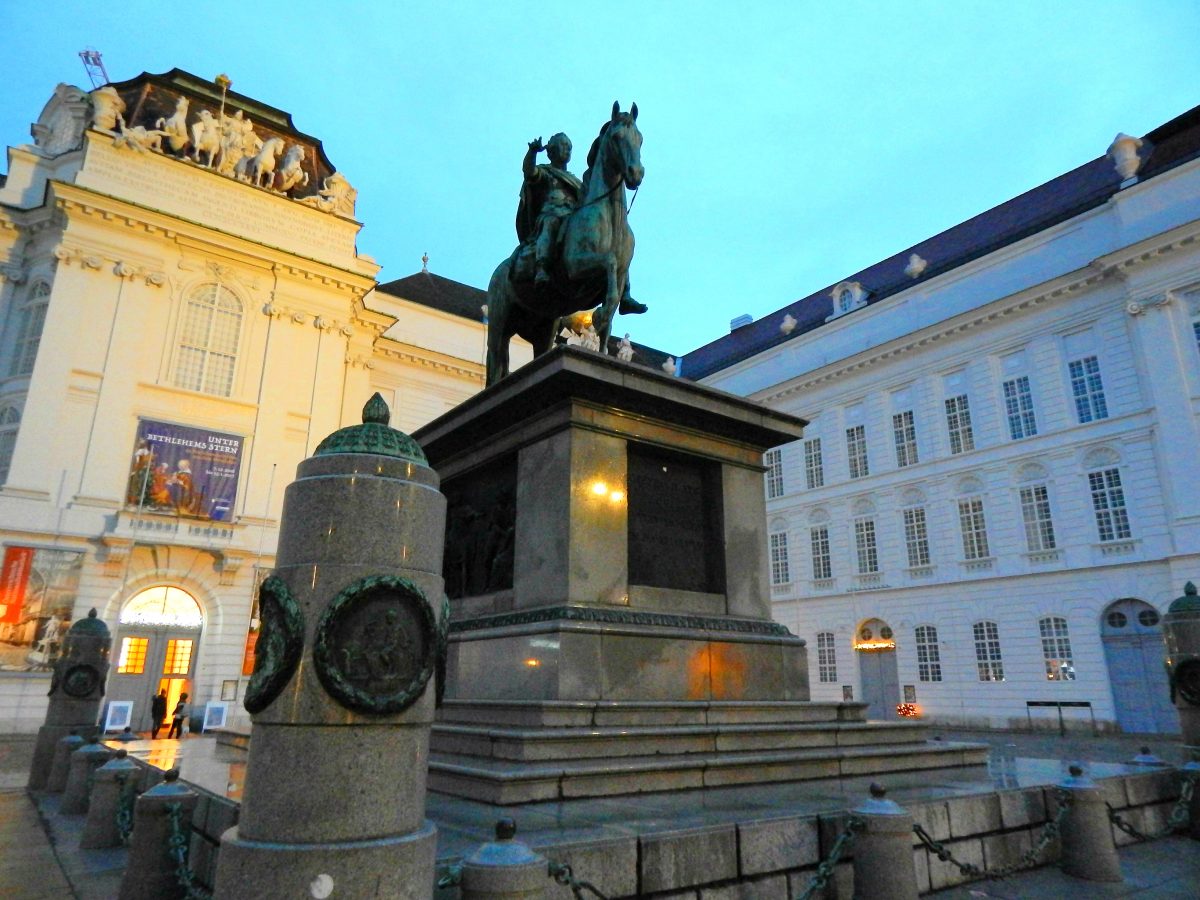 Hofburg Palace is huge! It’s the former imperial palace of Vienna. The tour meanders around and through the palace, as the tour guide tells you about its treasures and inhabitants – aka all the scoop about the Austrian royal family. My favourite stories were of Emperor Joseph II.

Joseph was the brother of Marie Antoinette (as in, ‘Let them have cake!’). He really cared about the common people in Vienna. He also wanted everybody, including women, to receive a basic education. In his old age, he became senile and a bit nutty. He got writers from everywhere in his kingdom to rewrite plays that didn’t have happy endings, like Romeo and Juliet.

The Austrian National Library is beautiful! You have to pay a fee to enter the library. Or, you can just stand in the doorway and look up at the stunning ceiling for a glimpse of what’s inside. 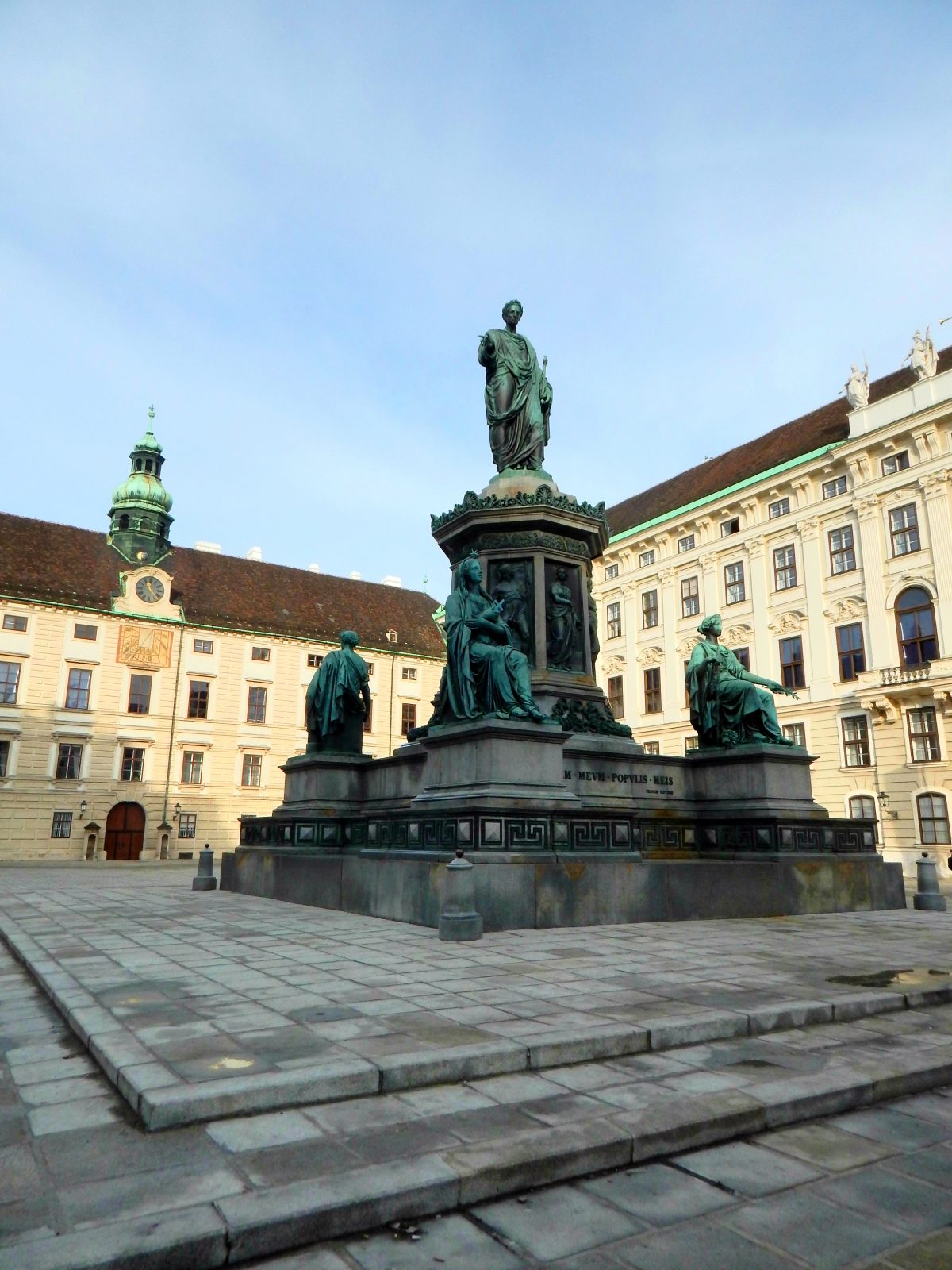 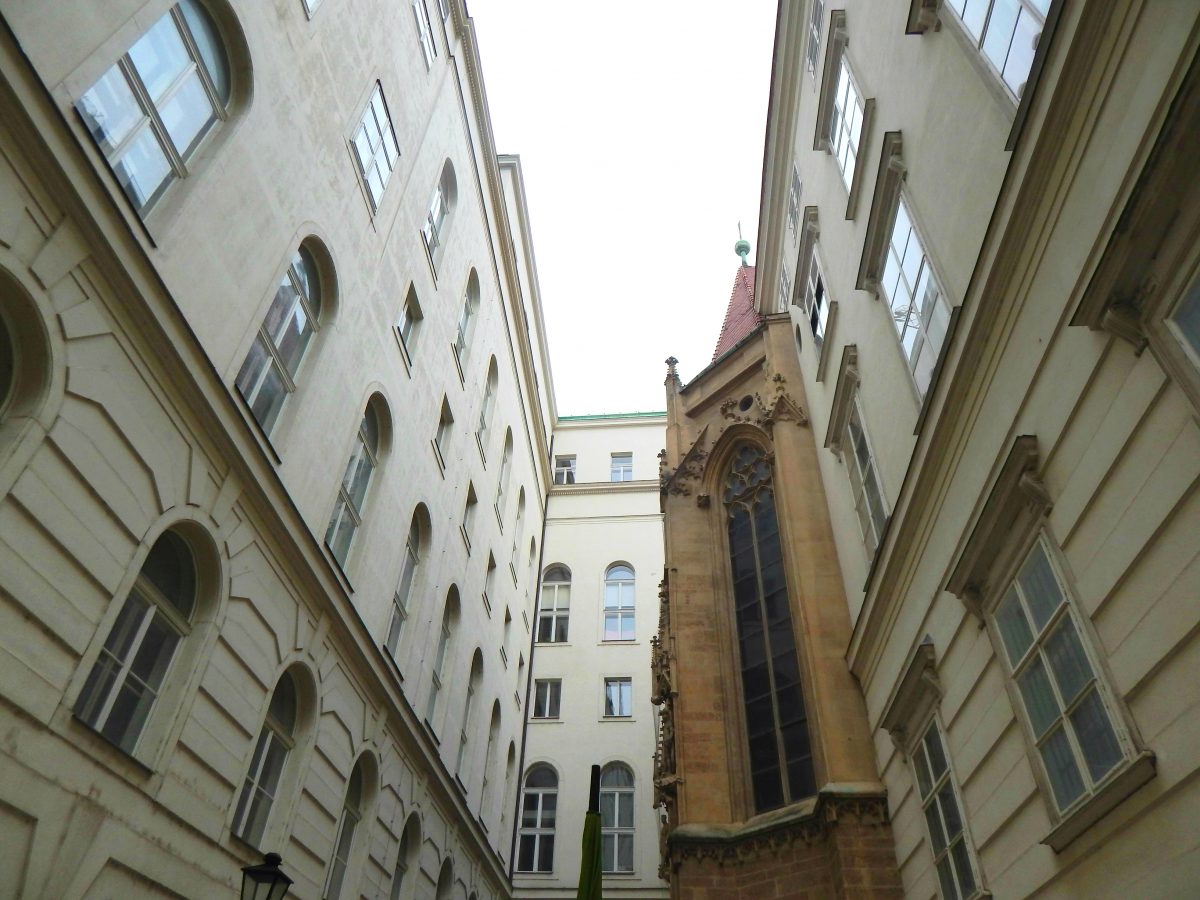 Here you’ll find the office of the current president. Hero Square or Heldenplatz has two statues: one of the general who defeated Napoleon (Archduke Charles of Austria) and the rejected hunchback general who liberated Vienna from the Ottoman Empire (Prince Eugene of Savoy). Return to Hero Square when the sun has set for some stunning views! 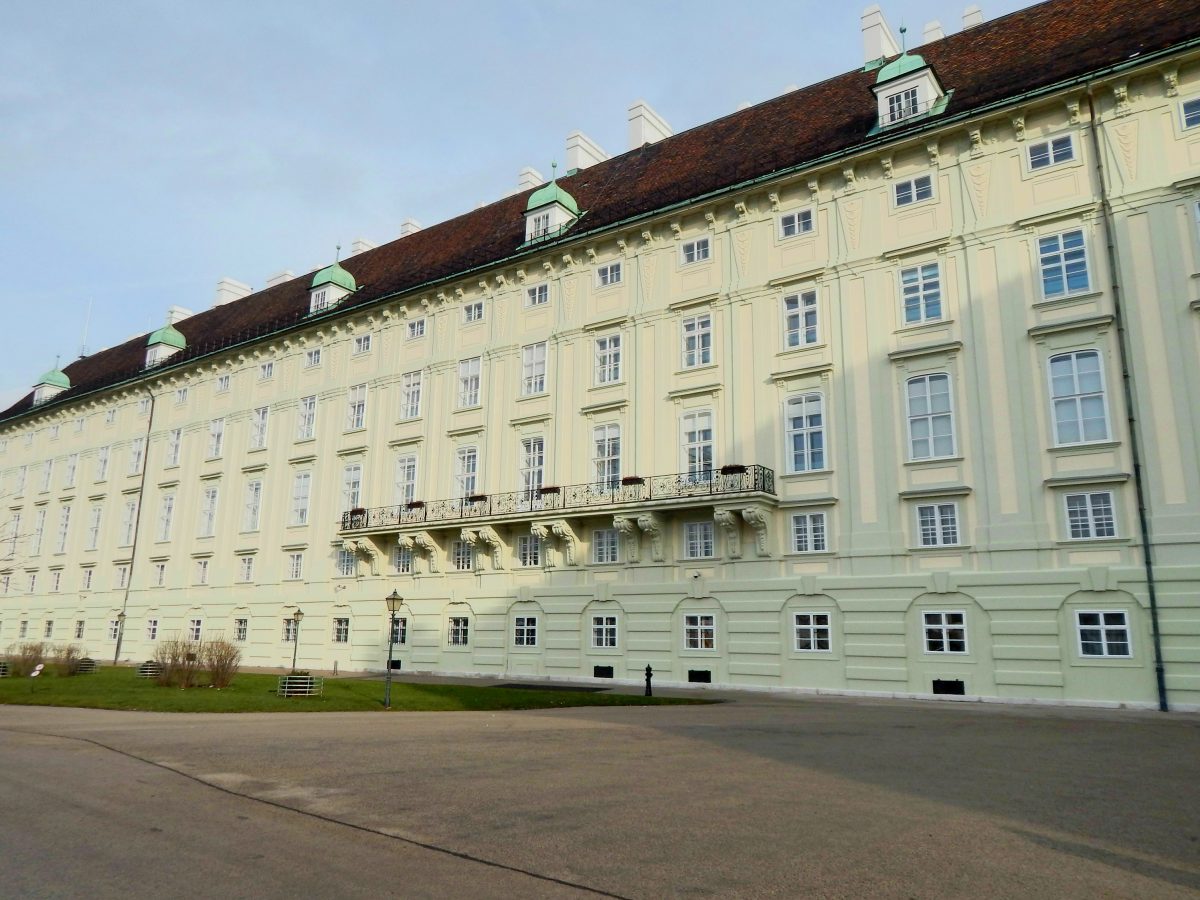 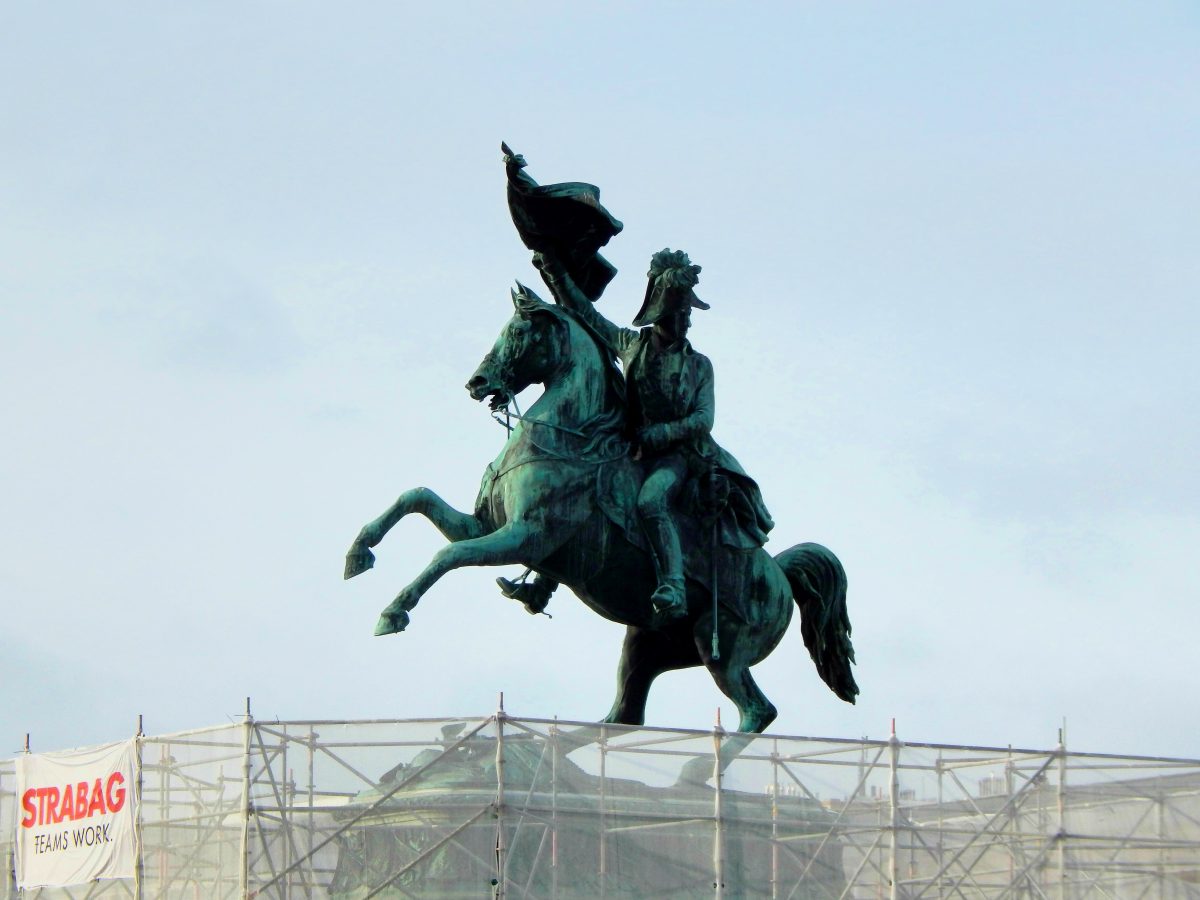 The imperial crypt beneath this church houses the remains of the Austrian Royal Family. 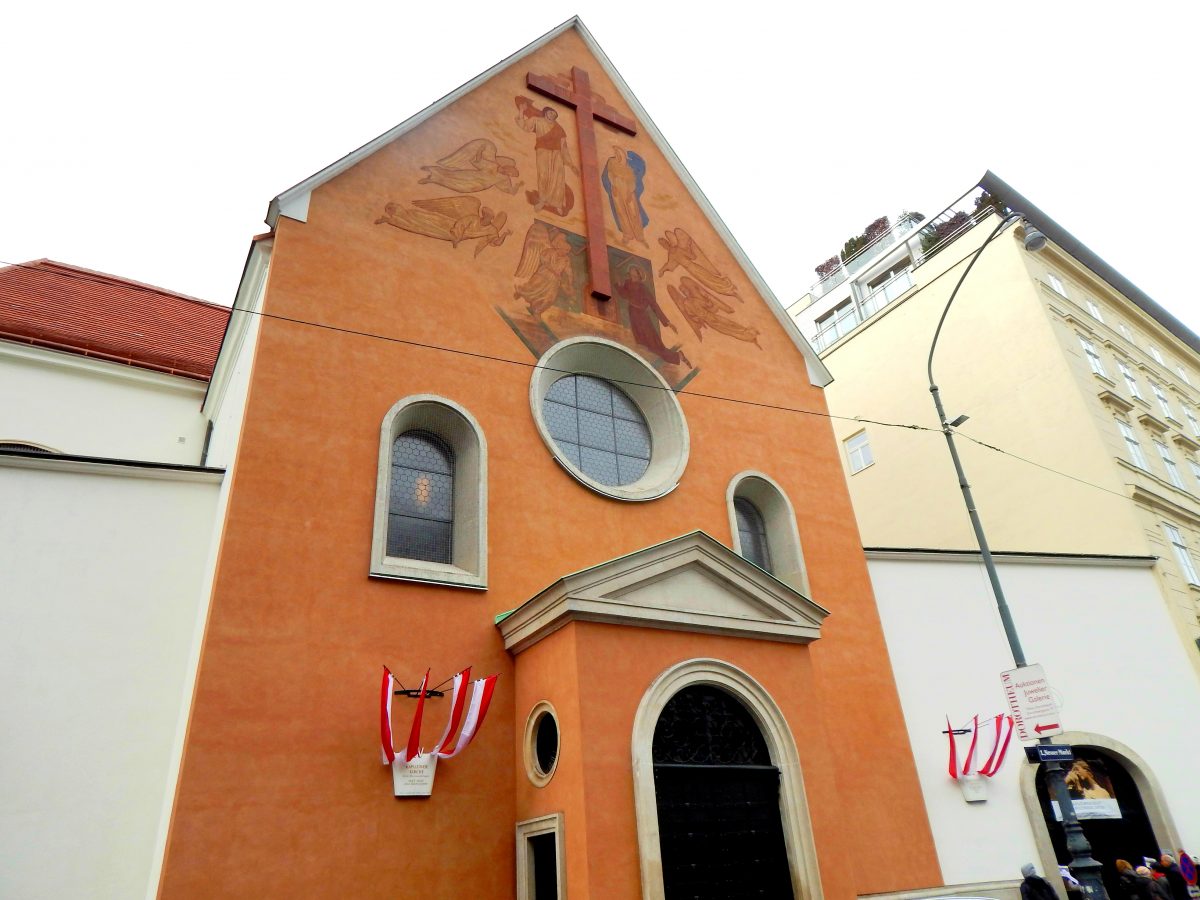 You’ll learn all about the ‘coffee culture’ in Vienna. Cafe Frauenhuber is the oldest coffee shop in Vienna. You’ll notice that the waiters are rather old (as in grandfather old). Being a waiter at Cafe Frauenhuber is very prestigious and lucrative. But there is a waiting list a mile long to become a waiter here. Also, the waiters aren’t known for their ‘sunny dispositions’. They can be quite rude and curt. But don’t take offence! 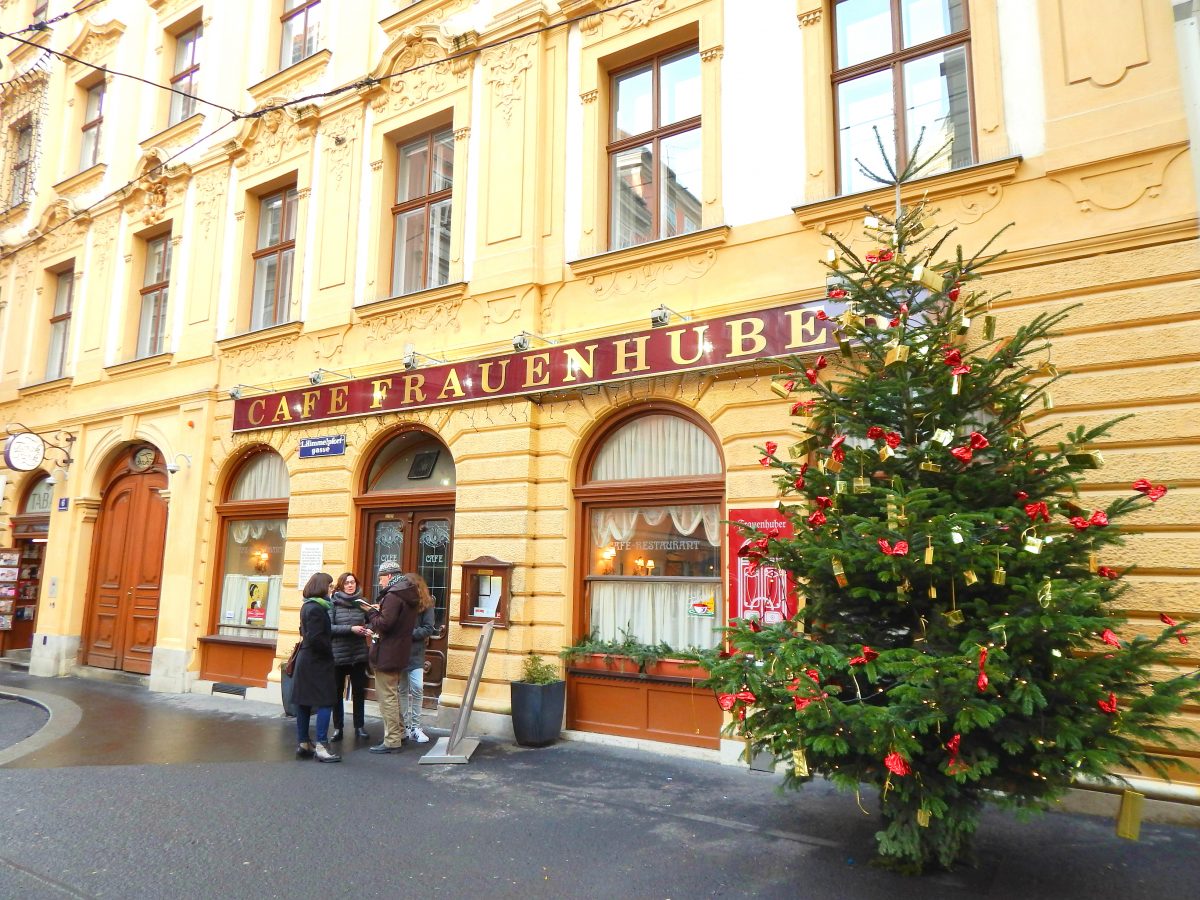 Midway through the tour, there’s a coffee break. You can buy something to drink and use the bathroom. This is a great time to ask the guide all your burning questions. The break lasts about 15 minutes.

The place where Mozart died

In Vienna, Mozart isn’t celebrated like in Salzburg, his place of birth. The building where Mozart died is now a mall. A plague on the wall is all that’s left to remind you that Mozart died here… 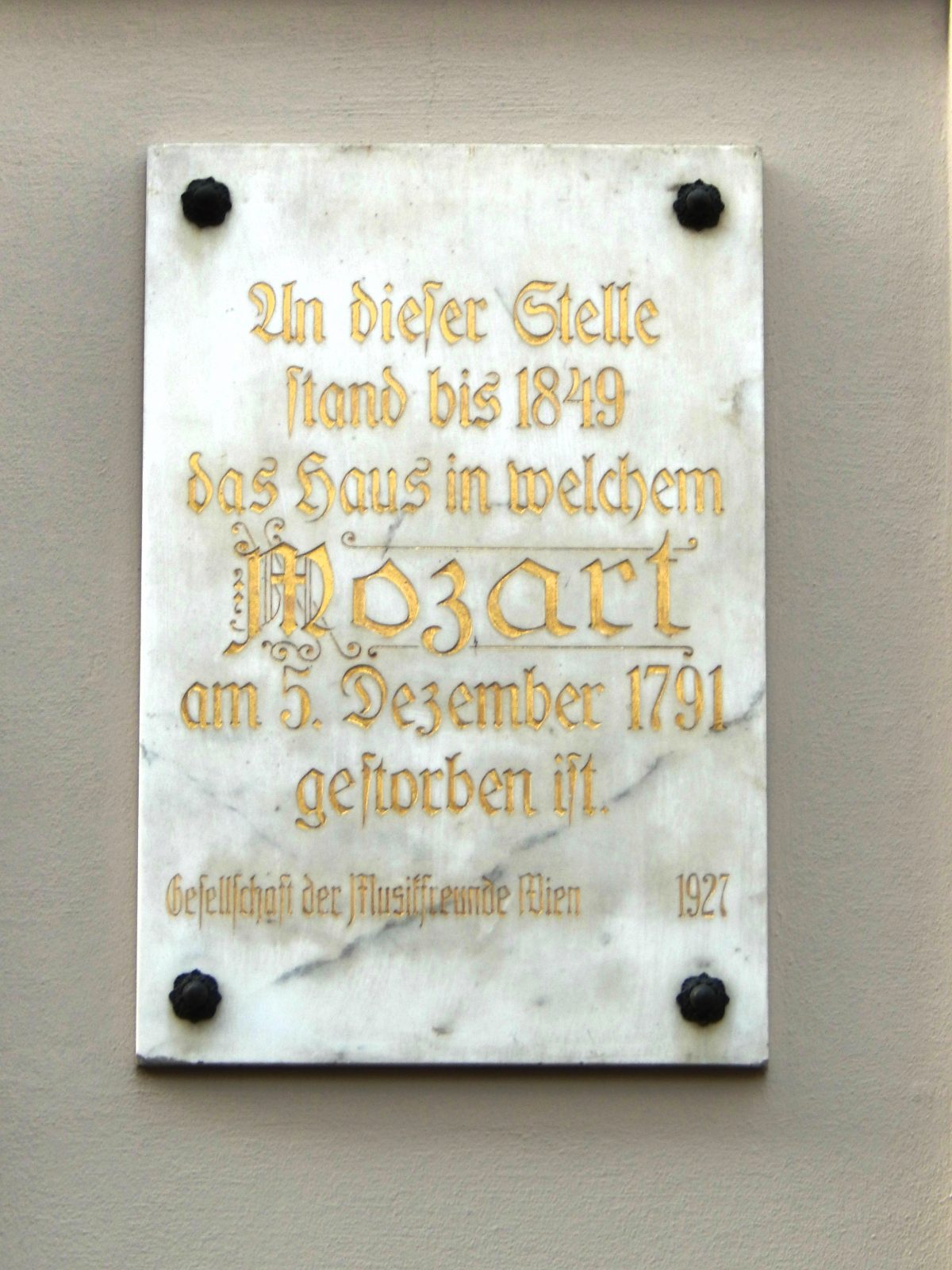 The church is in the heart of Vienna and approximately 800 years old. The oldest part of the church is the front door and the newest part is the roof. 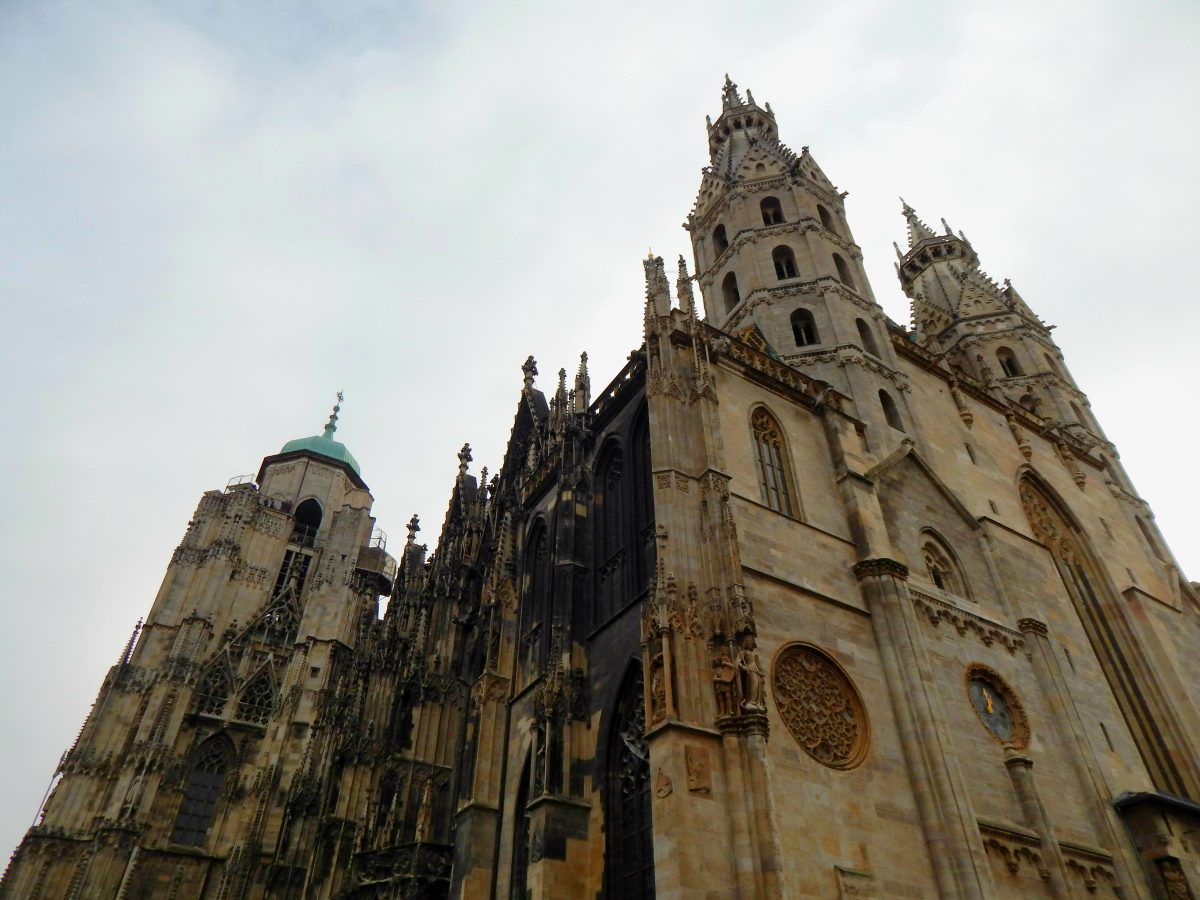 Time for another bizarro story: one of the builders of the church died in Italy during the summer way back when. The heat made it impossible for the body to be transported back to Vienna. So NATURALLY, to preserve the body, it was cooked in wine before being transported back to the Vienna! The builder is buried in the church today.

Be sure to check out the inside of the church after the tour. Entrance is free. 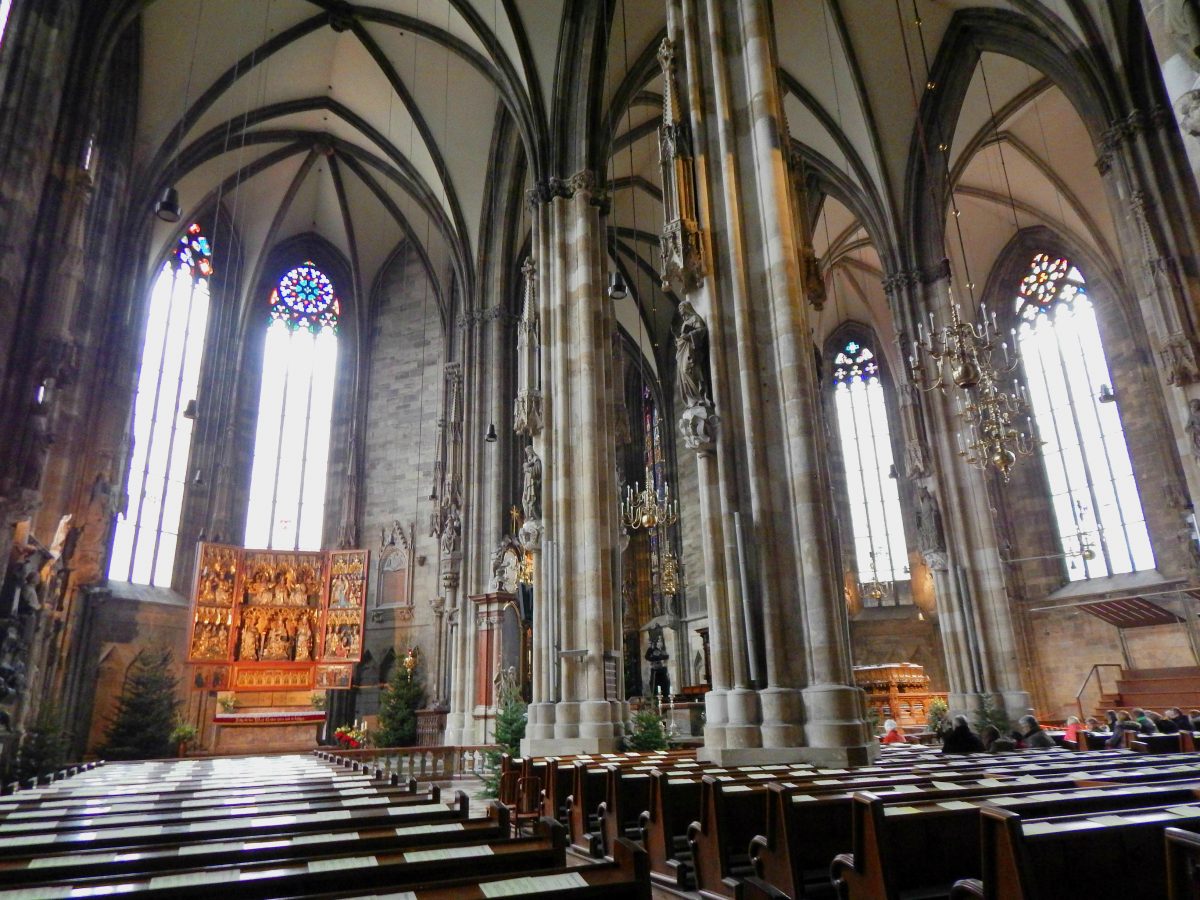 The clock is really pretty, but not astronomical like the one in Prague. The clock is beautiful, but what’s even cooler is the idea that the clock represents. A self-made millionaire that made his fortune by selling insurance, built the clock. He built the clock to say that with education and hard work, you can achieve anything! 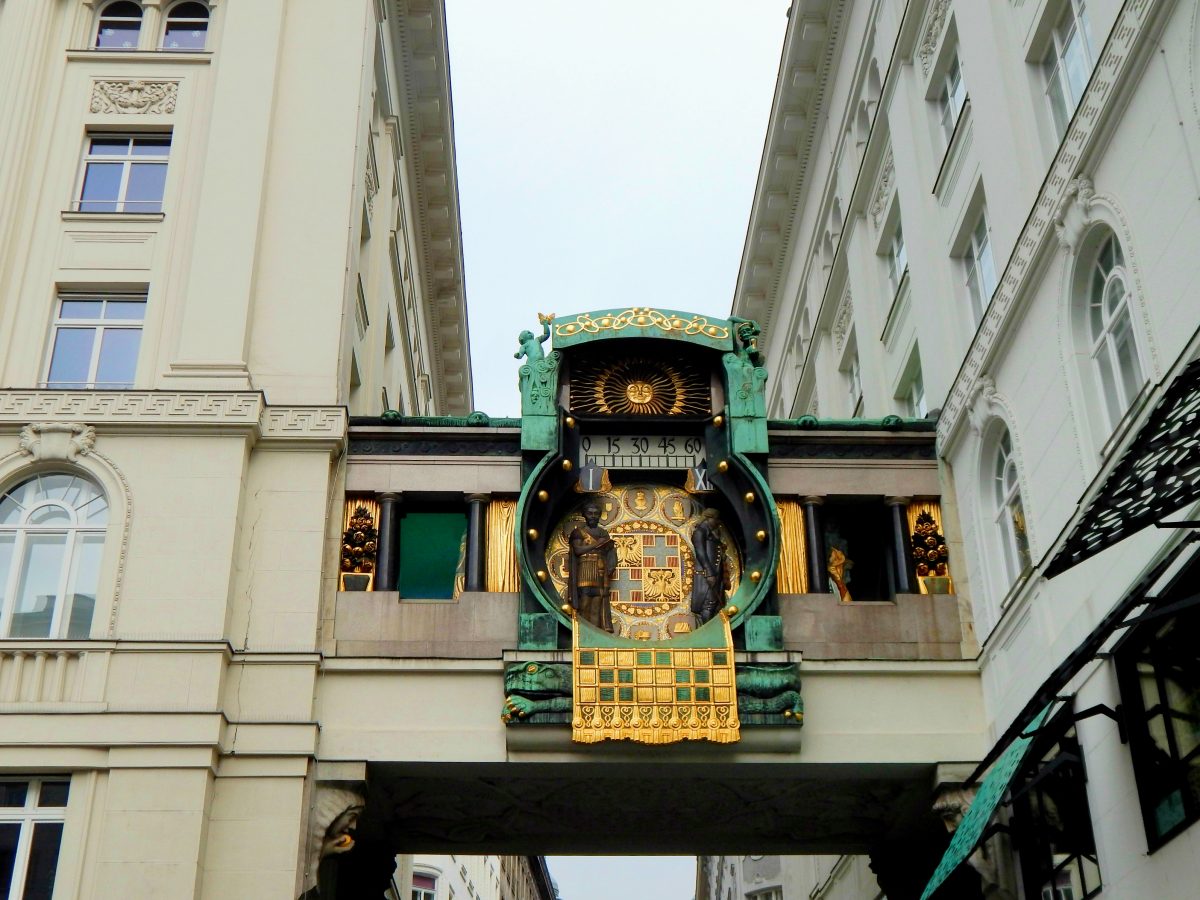 The tour ends in the Jewish quarter. Just around the corner is one of only a few synagogues left standing after World War II. 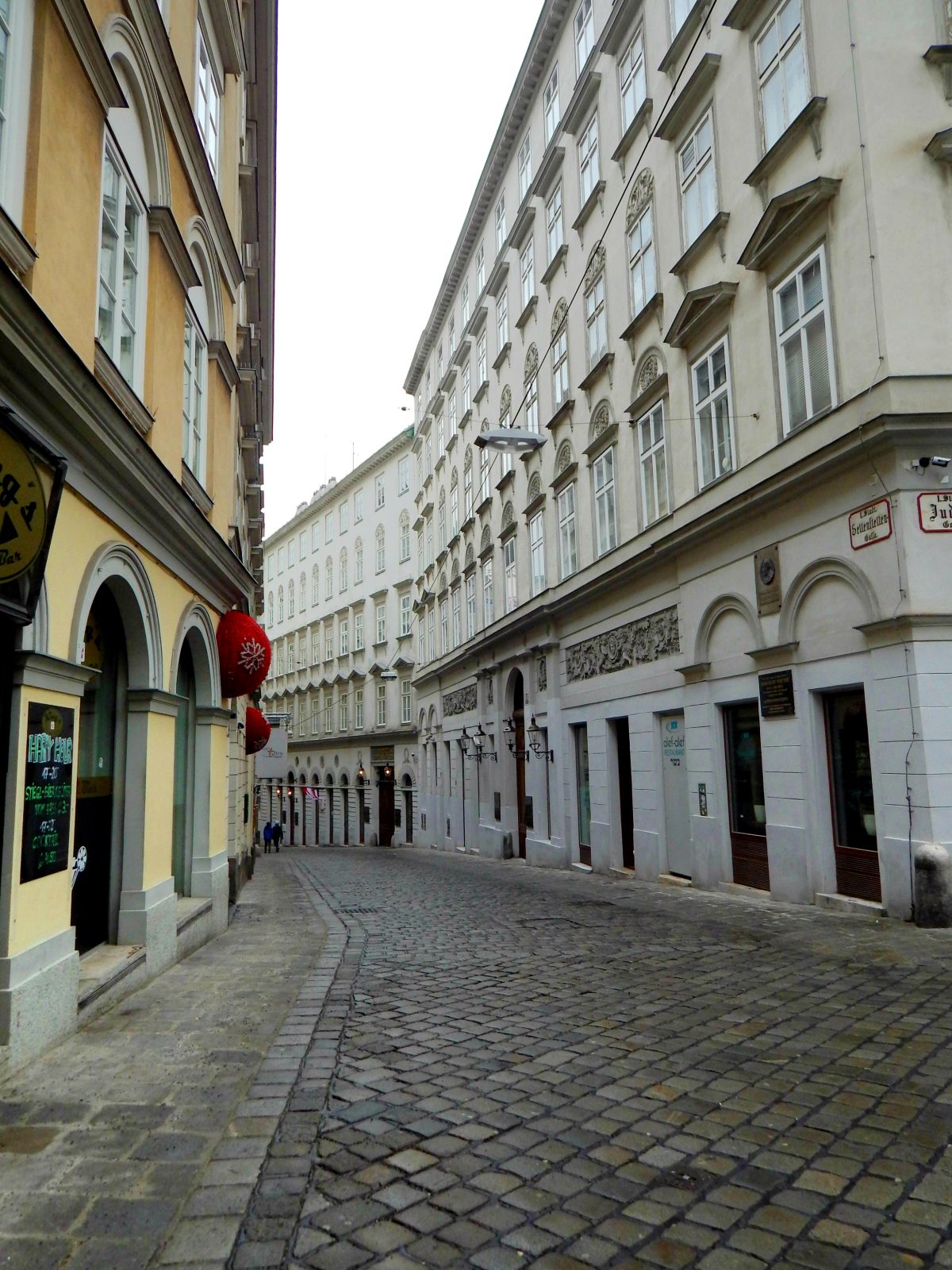 I think it’s obvious. I absolutely loved this tour and I highly recommend it! You should definitely check it out the next time you’re in Vienna. It takes you to all the main attractions throughout the city. I learned so much and Julia gave me some great tips! Remember to reserve your place ahead of time on the Good Vienna Tours website. 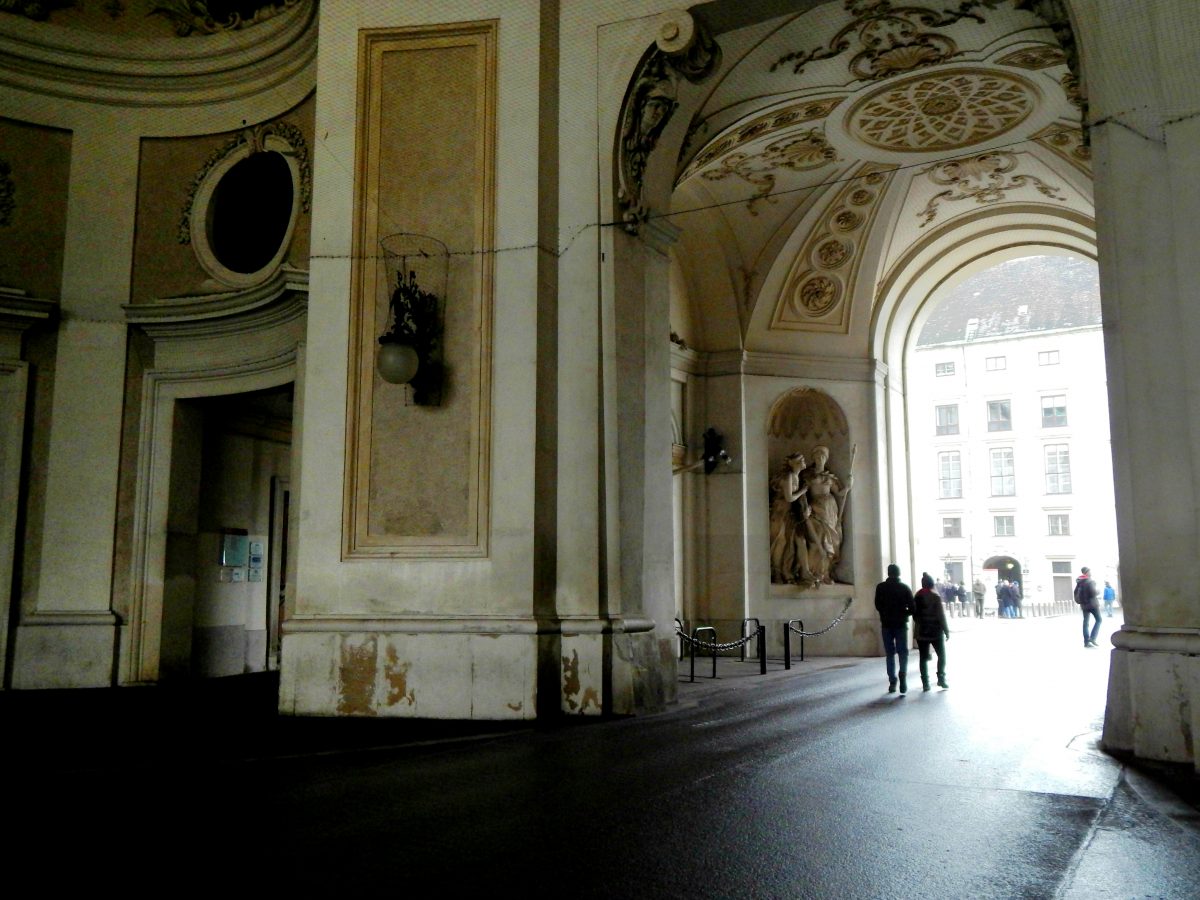 How to spend Christmas day in Vienna

The best Christmas markets in Vienna

Staying at the Enziana Hotel in Vienna