5 Reasons to visit the Tvindefossen in Norway 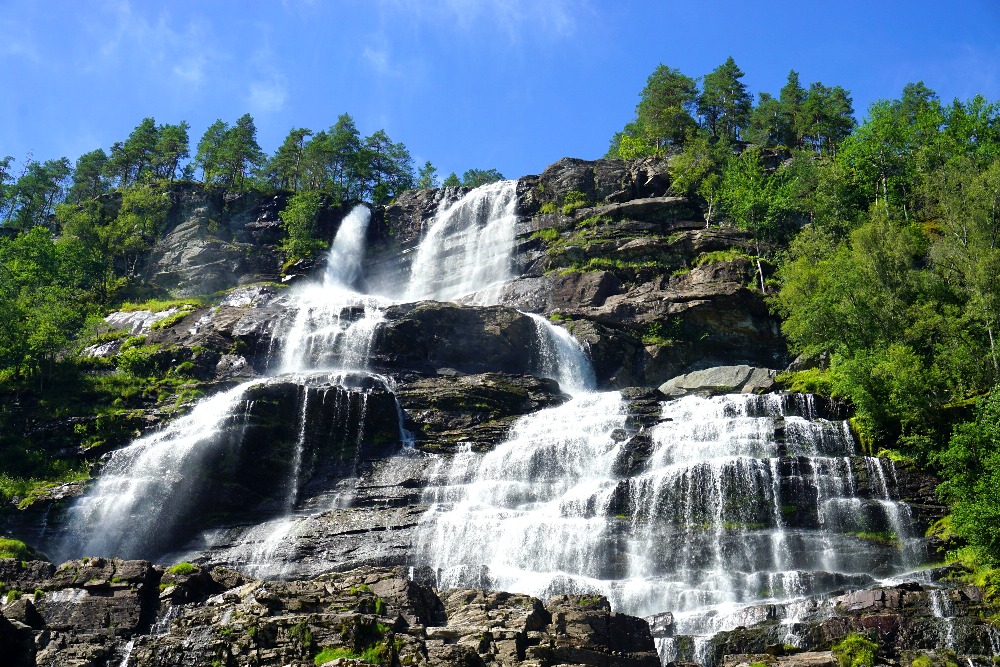 Norway is home to some of the world’s highest and prettiest waterfalls. At a height of 110 m, the Tvindefossen or ‘twin waterfall’ in the eastern part of the country is definitely worth a visit. It might not be the highest waterfall, but it’s regularly featured on lists of top waterfalls to visit in Norway. Here are five more reasons to add the Tvindefossen to your Norwegian bucket list.

1. The Tvindefossen is a pitstop on a very scenic road

The Tvindefossen is one of the easiest waterfalls to visit in Norway. It’s accessible from the E16, a very scenic road that runs between Voss and Flåm. You can see the waterfall from the road and the route itself also happens to be picturesque. The drive down Stalheimskleiva, one of the steepest roads in Northern Europe, into the Nærøydalen valley is both thrilling and incredibly beautiful.

2. It’s one of the most visited natural attractions in Norway

The Tvindefossen attracts thousands of visitors each year. In fact, at one point the waterfall was so popular that it was Norway’s ninth most visited natural attraction, with a total of 272 000 visitors that year. People from all over the world flock to the waterfall for its natural beauty and magical powers…but more about that later.

3. To let the Tvindefossen inspire you

A panorama of water cascading over the cliffs…sounds epic right? Perhaps the words describing the waterfall has already inspired you. Now imagine seeing the waterfall with your own eyes. The beauty of the Tvindefossen has captured and inspired many people over the centuries, including painters and writers. For example, the waterfall was painted by J.C. Dahl, who is considered to be the first great romantic painter in Norway. Also, the waterfall inspired me to write this blog post. 😉

The Tvindefossen is beautiful and you’re going to want to take lots of photos. It’s best to arrive early in the morning to take photos before the crowds roll in. But don’t worry, even if you roll in with the crowds you can still take great photos of the waterfall. For long exposure shots, it’s best to visit during spring and summer when the waterfall is flowing strong.

5. Because the water is said to be magical…

What started off as just a joke has now become a myth: the water of the Tvindefossen has magical powers! It’s been called everything from a modern-day ‘Fountain of Youth’ to ‘Viagrafossen’. The miracle water is said to gather its mystical powers from the small woods and marshes upstream, a place where witches roam…So don’t be surprised to see tourists flocking to the water, eager to fill up containers with the valuable liquid.

How much time do you need to visit? This is completely up to you, but I would say around 30 minutes is enough time to visit the waterfall. You can, of course, stick around longer and enjoy the beautiful surroundings or hike one of the many hiking trails in the area.

What facilities can I expect to find? There is a huge parking lot, so finding a parking space shouldn’t be a problem (even with all the tourist buses). A small gift shop selling snacks and drinks and souvenirs. There are also toilets which you can use for a small fee. A paved walkway takes you right up to the waterfall. The camping ground, Tvinde Camping AS, is located right next to the waterfall.

Did you enjoy this blog post? Then perhaps you’ll also want to read more about other Norwegian gems including Geiranger and the Kjosfossen.

Where to find the best views in Geiranger

Everything you need to know about visiting the...