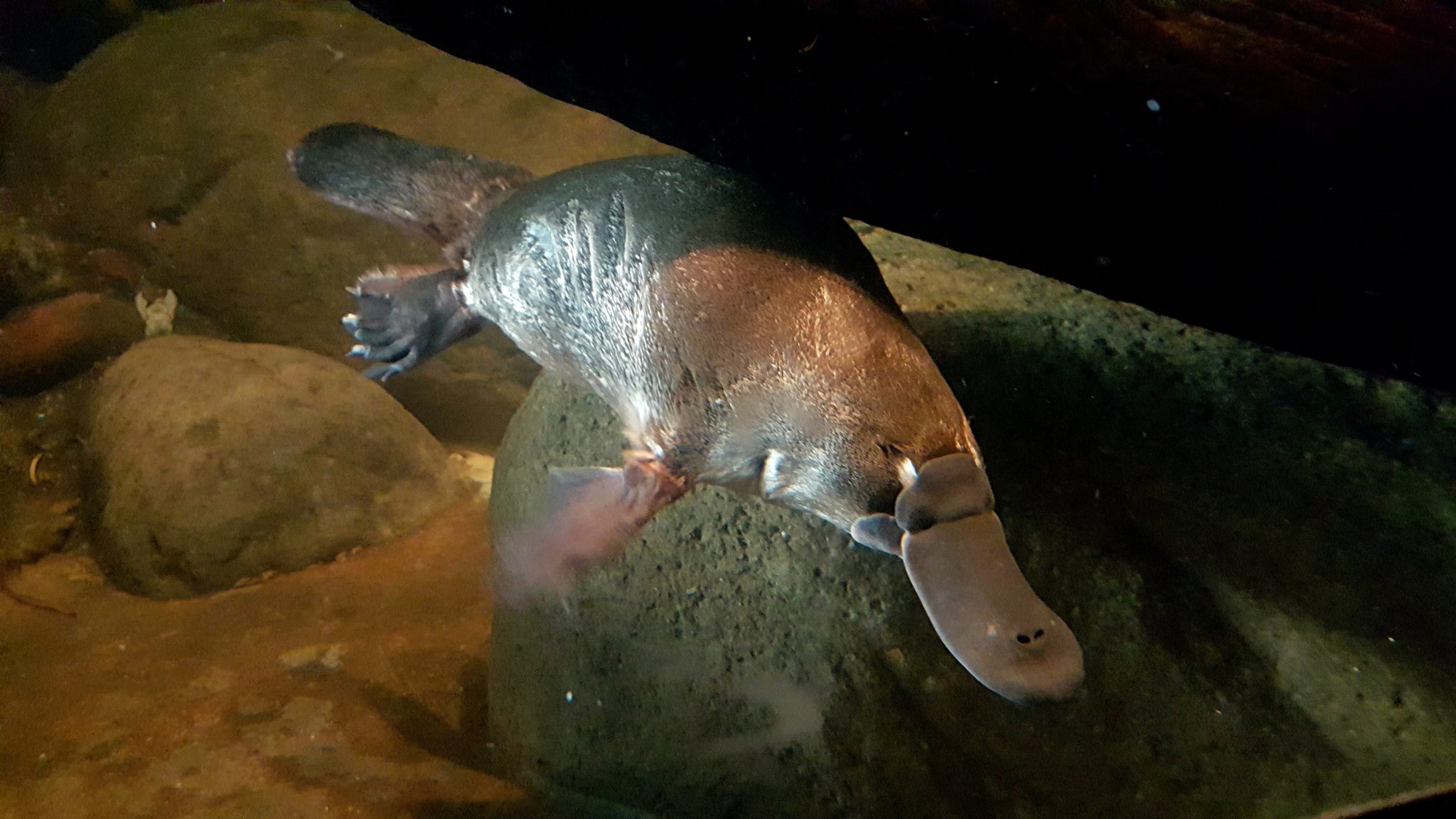 I’m back with another Aussie animal article and this time I’m bringing you 15 awesome platypus facts. The platypus is arguably the world’s strangest mammal, and hands down the most interesting animal I saw during my time in Australia. In fact, I went out of my way to visit two wildlife sanctuaries where I got to see three live platypuses. They are odd-looking creatures with a duck-bill, the tail of a beaver, and the feet and fur of an otter. They almost look fake, like they were glued together…but more about that later.

I went into full zoologist mode to learn all I could about these amazing animals. Here I share fascinating platypus facts and explain their unique adaptations. I will also answer all your burning questions: ‘do platypus have venom?’, ‘what is a baby platypus called?’, ‘what do platypus eat?’, and even the most fundamental question ‘what is a platypus?’. To find out the riveting answers, you have to keep reading! I hope you enjoy reading this blog post as much and I enjoyed writing it. Here we go, platypus facts that will blow your mind…

1. Platypuses sleep for 14 hours a day

That’s right! Platypuses sleep, on average, 14 hours per day whereas us humans average 7 to 9 hours. The mammalian sleep cycle consists of two stages, REM (rapid eye movement) and non-REM. REM sleep has been linked to dreaming and vivid imagery. The duration of REM sleep in platypus is 6 to 8 hours daily, more than any other animal on the planet! I wonder what they dream about?

2. The platypus has the lowest body temperature of any mammal

3. Platypus are one of only two egg-laying mammals in the world

A defining characteristic of mammals is that they give birth to live young, but platypuses and echidnas are the exceptions. Platypuses and echidnas are monotremes or egg-laying mammals. After mating, the eggs develop inside the female’s body for 21 to 28 days. The female platypus then seals herself off inside a burrow to lay up to three eggs (usually two), which she then incubates for 10 days before the young hatch. Unlike bird eggs, a platypus egg has a soft and leathery shell.

4. Platypus babies are the size of lima beans when they hatch

When platypus babies hatch, they are helpless and tiny, only the size of a bean. A platypus baby will nurse for three to four months until it’s weaned. Interestingly, the female platypus has mammary glands but no nipples. As you can image, this makes nursing a little bit tricky. She secretes milk through the pores of her skin, much like sweat, which the baby platypus can then lap up. Talk about weird…Of all the platypus facts, this is the most interesting one for me (scientifically speaking)! Also, there is no special name for a baby platypus. They are simply called ‘baby platypus’.

5. The platypus life cycle takes about two years to complete

Let’s do a quick recap. After mating, the gestation period is around 28 days. The female lays her eggs and incubates them for an additional 10 days until they hatch. A baby platypus stays with its mother for 3 to 4 months before leaving her side. Males reach sexual maturity at the age of two years, while females are sexually mature and ready for mating between the ages of 2 and 4. Therefore the platypus life cycle takes about two years to complete before it starts all over again.

6. Platypuses move better in the water than they do across land

Just by looking at the platypus, it’s easy to see why it’s made for life in water. They have sleek, streamline bodies with waterproof fur to keep them warm, skin to cover their noses, eyes, and ears while they are underwater, and webbed feet to help them swim. Although they can move on the surface too, they are better suited to the ‘aquatic’ part of their semi-aquatic lifestyle. In fact, platypuses use more than twice the energy to move across the land than they do to swim through water.

Despite all the incredible aquatic adaptations that platypuses have, they are still mammals. They can only stay submerged for 30 to 140 seconds before they must return to the surface for fresh air.

8. Platypuses are endemic to Australia

Geographically speaking, the platypus habitat is restricted to the wetter parts of eastern Australia (Queensland, New South Wales, Victoria, and Tasmania). But where exactly do platypus live? As I’ve already mentioned, they are semi-aquatic and therefore inhabit freshwater rivers, lagoons, and streams.

9. You won’t find captive platypuses outside of Australia

Do you want to see a live platypus with your own two eyes? Like in real life? Then you will have to travel to Australia to do so. There are no platypuses held in captivity outside of Australia. Within the borders of the country, you can see the platypus in eight wildlife sanctuaries across Queensland, New South Wales, and Victoria. I visited David Fleay Wildlife Park and Lone Pine Koala Sanctuary and I personally recommend both these sanctuaries.

10. Platypuses can be infected by a fungus associated with frogs and toads

In Tasmania, a fungus primarily found in frogs and toads has been detected in wild platypus. In platypuses, the fungus can cause ulcers. These ulcers can then become infected and cause the animal to die. The fungus can also reduce body temperature regulation. The platypus is thought to be susceptible to this particular fungus because of its low body temperature.

In case you were wondering, yes, male platypuses do have venom. Platypus venom is potent enough to kill a small animal like a dog. But don’t worry, their venom cannot kill humans. The venom might not be lethal to us, but it will cause you excruciating pain. And just so you know, using the term ‘platypus poison’ is incorrect as platypuses produce venom which is directly injected into the wound with a spur. Poisonous animals cannot control when or how to apply their toxins.

12. They were hunted for their fur

Years ago platypuses were extensively hunted for their fur. Luckily, the hunting ceased at the start of the 20th century, and today, the platypus isn’t a threatened species. They are, however, protected by the Australian government. Besides humans, other platypus predators include dingoes, dogs, feral cats, large snakes, birds of prey and eels.

That sounds so bad, but here’s what I mean by that statement. They are carnivores. A platypus diet consists primarily of aquatic invertebrates which they scoop up from the bottom or a river or lagoon with their bills. They find their food by detecting electrical signals, kinda like a sixth sense. You might be wondering: do platypus have teeth? The answer is no. Instead of teeth, they have two bony grinding plates. Along with their food, platypuses also scoop up gravel and mud which help them to break down or ‘chew’ their meal. Because platypuses have to consume 20% of their body weight daily, they can spend up to 12 hours a day foraging.

14. The platypus doesn’t have a stomach

Scientists linked the absence of a stomach in the platypus to the loss of genes responsible for pepsin and acid digestion. How then does the platypus digest its food? Good question. The initial breakdown of food takes place in their beaks via grinding plates and gravel. The food then passes down the oesophagus which is directly connected to the intestines where food digestion continues. Also, a diet of soft worms and insects doesn’t require a lot of processing. Therefore platypuses don’t need a stomach.

15. Early European naturalists thought the platypus was a fake animal

Yep. Way back at the start of the 19th century when European scientists were presented with the preserved body of a platypus, many of them believed it was a hoax, some sort of joke. They thought the body was ‘created’ by sewing parts of different animals together. But now that we know that the platypus is a real animal, can you blame them? Given how strange a platypus looks, I’m fairly sure I would have doubted it too.

Did you like this article? Was the platypus facts I shared interesting and did I answer all your questions? If so, show me some love by leaving a comment below or sharing this post on social media. You might also like my Tasmanian Devil blog post. If you didn’t particularly like or find the platypus facts helpful, then let me know too so I can improve the content.

16 photos to inspire you to visit South...

My granddaughter is crazy about the platypus. This article will help me talk with her intelligently. Also, guess what she’s going to be for Halloween? And grandma here is making her outfit. Thanks again for the great article.

Thank you for the kind words, Nancy. Good luck with making her Halloween costume!

You can now find two Platypuses outside Australia at the San Diego Safari Park! There’s a male and female. Highly recommend visiting if ever given the chance. The park is run by the San Diego Zoo Global nonprofit and they do conservation work all over the world.