Visiting Warnemünde Germany by cruise ship? Here are 9 fun things to do in one day 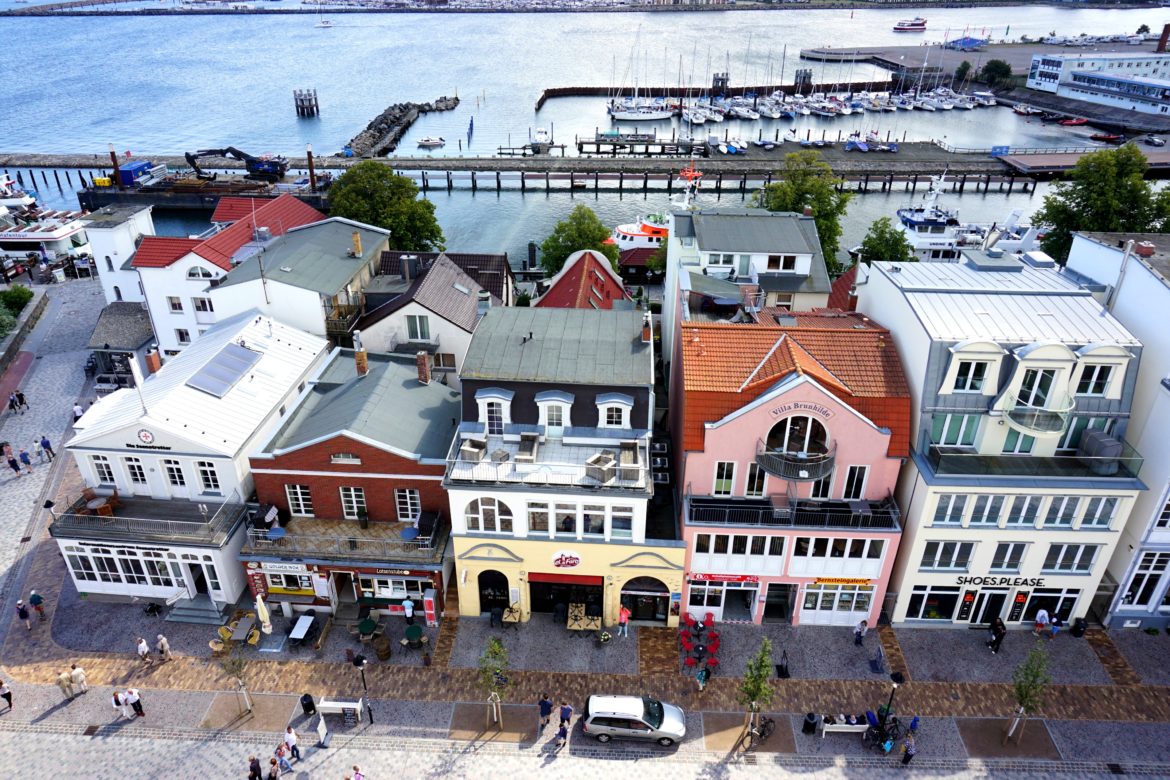 I visited Warnemünde during my 7 night Northern European cruise aboard the MSC Poesia this summer. Prior to my trip, I’d never even heard of Warnemünde. But after my cruise, I’m sure I’ll never forget this charming little German town. Warnemünde was founded around 1200 and for centuries it was merely a small fishing village on the Baltic Sea. Today, it is one of busiest cruise ports in the world!

It’s super easy to make your way to the centre of Warnemünde from the cruise ship terminal. Just follow the signs for the ‘city centre’ as you leave the ship. The path will take you underneath the train tracks at the main station, and the town lies just on the other side. I would say it’s about a 10-minute walk.

I decided not to book any tours through the cruise line, but to rather explore the town on my own. Below I share nine fun things to do in Warnemünde in one day.

1. Walk along the sea promenade

Warnemünde has a beautiful, wide promenade that runs parallel to the Baltic Sea. It was built over 100 years ago and stretches for 2 km starting at the famous Warnemünde Lighthouse in the east and terminating into coastal forests in the west. The promenade is flanked by beach villas on the one side and white sand dunes on the other. No matter the weather, this is a great place to enjoy a walk.

It’s difficult to miss the prominent neo-gothic church in the old town centre of Warnemünde. It dates back to 1866 when construction of the current brick building began. As impressive as the outside of the church is, the interior is more modest, but still fitted with interesting furnishings such as a carved altar and Renaissance pulpit. Be sure to check out the interior of the church as there is no entrance fee.

The incredibly wide (up to 80 meters) sandy beach of Warnemünde is definitely one of the main attractions. Whether you want to swim in the cool Baltic Sea, or laze on a strandkorb or walk along the white sandy beach, the choice is up to you.

Fun fact: The strandkorb or german beach chair was invented here (Rostock) in 1882.

4. Search for the Dutchman windmill

The windmill was built in 1866 and up until 1991, corn was milled here. Since then, the windmill has been converted into a residential building, including a restaurant. As someone who lives in the Netherlands and has seen a large number of windmills, this one isn’t particularly special. But if you haven’t seen a lot, then this one is worth checking out. Just note that the windmill is currently being renovated (July 2019).

Insider tip: You can get the best view of the windmill from, you guessed it, Mühlenstraße.

This is a fun activity that the whole family can enjoy. The lighthouse has a height of 37 meters and was built in 1897. Approximately 100 stairs take you to the top of the tower and at 31 meters, you can practically see the whole town. Entry is only €2. Note that you can only climb the tower from Easter to autumn.

6. Explore the area around the Alter Strom

The Alter Strom is the lively heart of Warnemünde, a canal filled with boats and surrounded by restaurants and shops. It’s a great place to take a stroll or do some people watching. So grab an ice cream or a fresh German pastry and just watch the boats go by…There is also a market where local fishermen sell freshly caught fish.

7. Check out the pretty houses on Alexandrinenstraße

With its quaint little houses and tall trees, this pretty street looks like it belongs on the canvas of some famous painter. Long ago, fishermen, sailors and pilots used to live in these houses.

8. Shop till you drop in the local shops

If you like shopping as much as I do, then the local shops in Warnemünde will not disappoint. You can expect to see a variety of products, from spices to homemade liquor and treats to art galleries and everything in between.

9. Walk along the west pier

Take a romantic stroll along the west pier that runs 500 meters into the Baltic Sea. Believe me, the view is great! The pier mainly serves as a breakwater to stop the currents of the Baltic Sea and to facilitate the approach of incoming ships. At the end of the pier is a green and white lighthouse.

Just as you exit the cruise ships (Pier 7), there is a temporary sand sculpture exhibition (Warnemünde Sand World) featuring artists from all across Europe. This is the best sand art that I’ve ever seen and it’s completely free to visit! From what I’ve read on the internet, there is a sand sculpture competition/exhibition every year. The exhibition runs until the end of October.

Although Warnemünde is fairly small, there are lots to see and you can do all these activities at a leisurely pace. If you crave more excitement or you simply want to see more, Rostock is only a 30-minute train ride away. Now technically, you can also travel to Berlin or Hamburg. But these cities are huge and hours away. I wouldn’t recommend visiting them on this port stop. Rather, stick around and explore all that Warnemünde has to offer.

The Christmas market in Gengenbach

My best Winter Moment: Walking to All Saints...

Staying at Hoteltraube Rüdesheim in the Rhine Valley